Since we use technology so much now—in school and at work—is cursive really important? Isn’t it something we could do without?

Even though we live in a digital world, learning cursive is still worth it. Here are six reasons why:

1. It activates parts of your brain that typing or writing in manuscript don’t.

Writing in cursive brings more involvement from the brain, and the extra involvement helps it develop.

In “Why Writing by Hand Could Make You Smarter,” William R. Klemm, Ph.D., writes, “The benefits to brain development are similar to what you get with learning to play a musical instrument. Not everybody can afford music lessons, but everybody has access to pencil and paper.”

2. It makes learning to read and spell easier.

Learning cursive encourages language development by connecting the letters together in writing, which encourages connections between letters and sounds.

In “Brain Development Could Suffer as Cursive Writing Fades,” Leah McLean reports that cursive handwriting stimulates intelligence and fluency in language more than writing in manuscript does.

Sure, we have computers and smartphones and tablets with us most of the time, but not always. And accidents happen—like dead batteries, broken screens, etc.

Writing in cursive or in a combination of manuscript and cursive is faster than writing in manuscript.

If students don’t know cursive in the first place, the only tool they have is manuscript writing (which requires raising the pen from the paper to make each letter separately instead of smoothly flowing word by word).

Cursive helps ideas flow faster, too. Katy Steinmetz reports in “Meet the Mother—Daughter Team Set on Saving Cursive” that students get more ideas for writing assignments when they write by hand instead of using a keyboard. So if they’re writing in cursive, they’ll be able to come up with ideas faster and write them down more quickly.

Imagine opening a card or letter—one written in print, and one in cursive. Which one seems like it took more time? Which one would you spend longer looking at?

The way writing looks can even influence grades. Jaclyn Zubrzycki reports in Education Week that according to Professor Steve Graham, teachers give lower scores to tests with less-legible writing.

Everyone’s signature is unique, and the way someone writes their signature can even tell you something about them. (That’s part of why there’s a field devoted to handwriting analysis, graphology.)

With manuscript signatures, there’s less room for creativity and personalization—and more room for easier forgery. Perhaps that’s why so many official documents require both a printed and a cursive signature. It helps us stay connected to the past.

There’s nothing quite like getting a card in Grandma’s one-of-a-kind cursive, flipping through an old family journal, or studying your family tree.

But not learning cursive means not being able to read those precious pieces that connect us with family. That generations-old recipe? Someone who knows cursive will have to “translate” it.

Does that really happen? Don’t students just “pick it up” through the years?

In “The Case for Cursive,” published in The New York Times, author Katie Zezima tells the story of a 22-year-old college student and her cousin flipping through their grandmother’s journal not long after she died—and not being able to read it.

Pieces of American history are lost when we can’t read cursive, too. Yes, the Constitution and Bill of Rights can be found in print online. But shouldn’t we be able to stand in front of those documents (and others like it) and be able to read them?

The coordination between the hand, the eye, and the brain—plus the concentration required to learn cursive—helps improve motor skills.

William R. Klemm, Ph.D., writes in “Why Writing by Hand Could Make You Smarter” that “cursive writing helps train the brain to integrate visual, and tactile information, and fine motor dexterity.”

If you teach cursive first, you’re taking full advantage of its benefits on development.

And learning fine motor skills through cursive can have surprisingly long-term results. In “Is Cursive’s Day in Classroom Done,” experienced educator Jeffrey Mims, Jr., says that “cursive writing could be important for children who grow to be a surgeon, a painter, or some other professional requiring laser-like precision with their hands.”

2. It makes learning to read and spell easier.

Learning cursive encourages language development by connecting the letters together in writing, which encourages connections between letters and sounds.

If students learn cursive first, they’re used to connecting letters and sounds—making it simpler to learn to read and spell.

Cursive also helps make learning to read and spell easier by making letters more distinct—and less easy to confuse. For instance, band d look very much alike in print, but they’re more unique in cursive. So if students already know the difference between b and dfrom learning cursive, they won’t have to focus on keeping them straight when it comes to learning to read and spell.

3. It keeps students from having to relearn how to write.

When you learn something new—practicing and practicing until you’re good at it—wouldn’t it be hard to let go of everything you know and learn a whole new way of doing it?

Education expert Sam Blumenfeld says in “The Benefits of Cursive Writing,” “If you teach a child to print for the first two years, that child develops writing habits that will become permanent. Thus when you try to get your child to switch to cursive in the third year, you will find resistance to learning a whole new way of writing.”

Blumenfeld also says that if students learn print first, they may never be able to write well in cursive. (On the other hand, he explains that students who learn cursive first can easily learn to write in print later.)

According to “Learning Cursive in the First Grade Helps Students,” when writing is automatic, students don’t have to split their focus between remembering how to write and remembering how to spell. And because they’re able to write more quickly, they can also capture more ideas on paper.

4. It gives a sense of accomplishment that manuscript doesn’t.

There’s something about being able to write in cursive, a “grown-up” form of handwriting you see in old manuscripts, wedding invitations, and one-of-a-kind signatures.

When students learn cursive first, they can feel proud in their ability to do something that most of their peers (and many students much older than they are) can’t do.

5. It’s easier to learn than manuscript.

If a 4- or 5-year-old hands you something he drew, it’s probably going to have a lot of circles and curvy lines. Right?

That’s why cursive is easier to learn for most—because it uses the shapes children make naturally.

In “Teachers Still See Value of Cursive Writing,” teacher Patricia Harpring says learning cursive is “a big self esteem booster for a lot of children who have trouble writing with manuscript; it’s great to see them feel good about themselves.”

Does it take practice and skill? Yes. But it’s still easier than learning to print.

“It is far more difficult to make straight lines and perfect circles in ball-and-stick [print] than it is to write the fluid curves and loops of cursive,” says educator Sam Blumenfeld in “How Should We Teach Our Children to Write? Cursive First, Print Later!”

After just four months of a few minutes of teaching cursive each day, children can write in legible cursive (and be proud of it!). 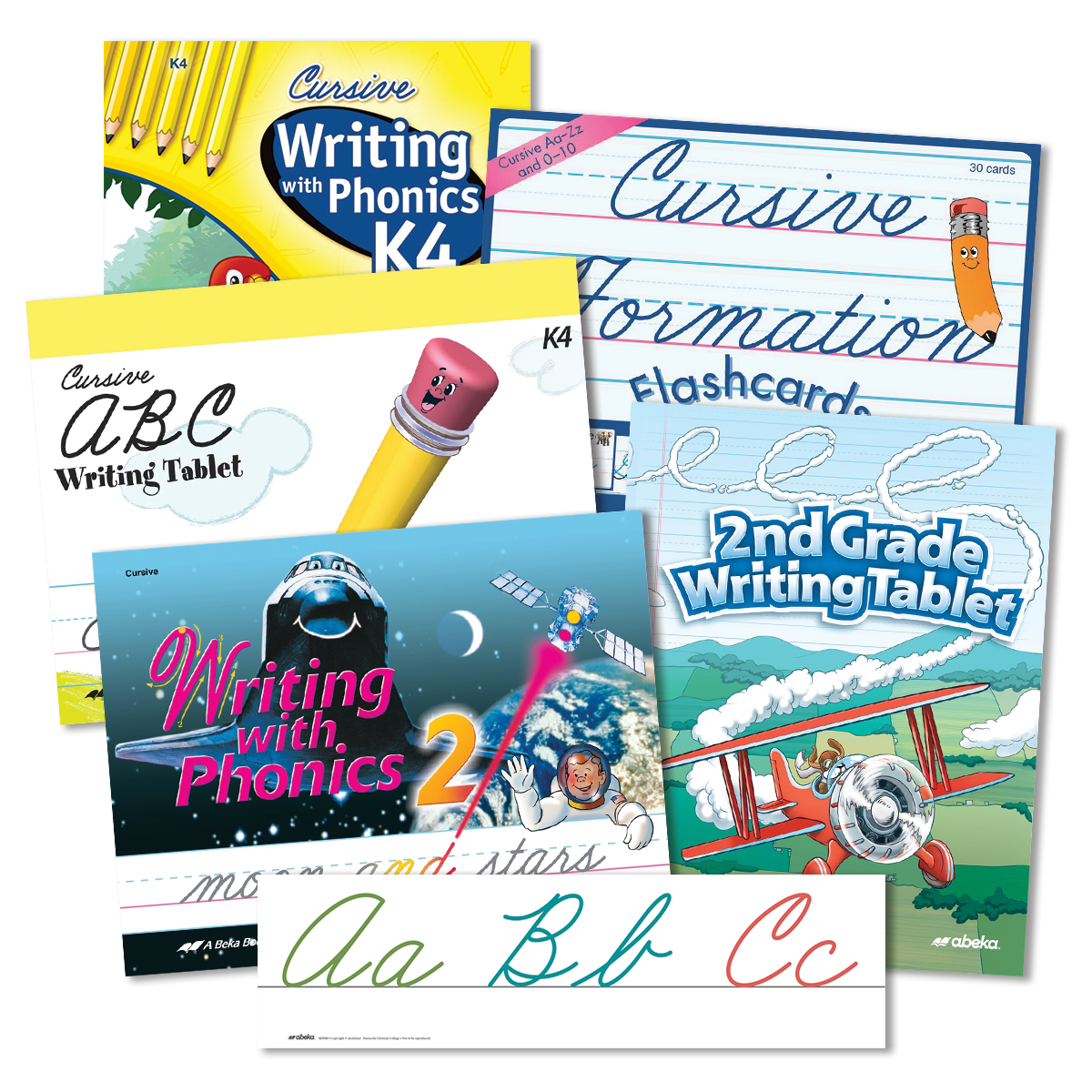 Cursive must NEVER be deleted from our schools! Atheists do NOT want cursive taught because they don’t Want our historical legal documents to be read. America was, is and will forever be a Christian nation and the liberals are against that truth. Our history books have been rewritten with lies and deception and the original truth of America has been delete. This is The philosophy of the evil and demonic COMMON CORE which brain washes our children and grand children . It condemns Bible Christianity and promotes the LGBTQ lifestyle and the Muslim religion. Don’t believe me? Then google “ CHOOSE TO REFUSE COMMON CORE” and read the hundreds of personal testimonies that confirm this. CC is teaching how to become a Muslim by requiring the Koran to be read and making kids PRACTICE that religion by wearing Jihabs, visiting mosques, making a prayer rug, reading the Koran and learning the 5 pillars. Concerned parents need to check this info out. There is no excuse for ignorance and our children are in danger . There is even a “ PRETEND YOU’RE A MUSLIM DAY”. At many schools. We must always teach cursive. To delete it is hindering children .

Ways to Engage Your Children Over the Summer

1. Take School Outside! A great way to switch up the school routine on a… Read More

A Guide to Abeka Homeschool Options