As teachers, we spend almost as much time with our students as they do with their own families. We are with them all day, speaking to them, giving them direction, and guiding them, not only with our actions but with our words. Psychological studies reveal that the words we choose when speaking to children will impact their ability to receive information, as well as the way they feel about themselves.

The Bible says that “a word fitly spoken is like apples of gold in pictures of silver” —Prov. 25:11 and that “pleasant words are as a honeycomb, sweet to the soul, and health to the bones” —Prov. 16:24.

So, we wanted to pose the important question: as a teacher, how can your words be, in their own way, beautiful and sweet? How can they help your students reach their God-given potential?

Although it’s absolutely necessary to say “no,” it’s easy to start to feel discouraged by how often you find yourself saying it. The repetition of negativity can be discouraging for you as well as hindering your students from learning what you’re trying to convey. 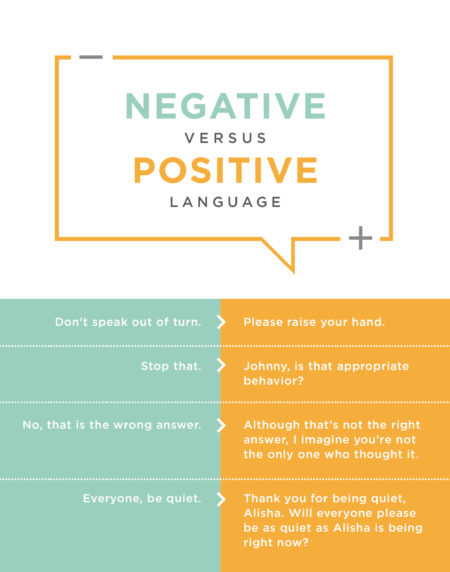 Think about the situations that happen every day in your classroom. What words do you use now? Are there more positive, encouraging words you could add? Of course, “no” will still be in your vocabulary. But you’ll notice a change when you use constructive words that go beyond simply saying “no” to clarify what you expect.

Praise Effort and Progress (Not Intelligence)

By being intentional about the words you choose every day, you could help your students successfully face challenges throughout their lives. Use words that guide them rather than blanket statements that entitle them. In turn, they will practice the act of learning rather than having an expectation of success.

There are subtle messages you may not realize you’re sending with your word choices. For instance, the oh-so-tempting “You’re so smart!”

According to a survey conducted by Columbia University, 85 percent of American parents think it’s important to tell their kids that they’re smart. The praise is well-intentioned. Surely, it’s helping to ensure confidence in themselves, right?

But according to new research, labeling children as “smart” might actually be causing them to underperform in certain areas. Praise for being smart limits the growth mindset you want to create, and it contributes to a fear of failure and an avoidance of challenges.

An article in New York magazine entitled, “How Not to Talk to Your Kids” reported that children who are told they’re smart start to believe it’s a part of who they are. When they encounter something challenging, it feels like a failure because it’s not easy.

What happened? A majority of the students praised for being smart chose the easy puzzle. They could’ve grown with the hard puzzle! But they were afraid of the challenge. In their minds, they might fail and no longer be seen as “smart.”

A whopping 90% of students praised for their effort chose the harder puzzle.

These studies by Columbia and Stanford faculty Carol Dweck show that students achieve more with an emphasis on effort instead of on self-esteem. This clearly illustrates what the Bible was already telling us—that work is valuable, and learning is a continual pursuit. 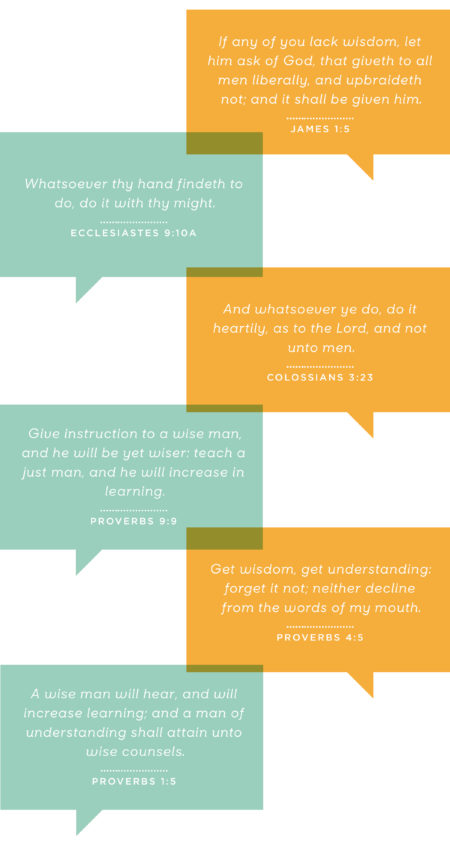 Give Your Praise Value and Effectiveness by Encouraging Sincerly and Specifically

Mark Twain said, “I can live for two months on a good compliment.”

Good compliments really are like a great meal—they keep you going. You savor them.

But there’s a catch – if you compliment only the struggling students, your class starts to think encouragement is tied only to poor performance. Your students who need improvement feel singled out, and not in a good way. Your students who are doing well can also feel unrewarded, less noticed.

How do you avoid that? Praise students for those areas where they excel and for right answers (e.g., “Good thinking!”). Encourage by sincerely emphasizing strengths.

Also, give specific praise that tells something. Instead of saying “Good job!” give specifics like “You followed directions perfectly!” or “Your multiplication is getting much faster!” or “That’s a great example of how to perform a poem with expression.”

The right kind of encouragement goes a long way. With a little extra thought, we can influence our students with our word choices in a positive way that will create a ripple effect in their lives.