Language is one of God’s greatest gifts to man. It is the single most important factor that binds men together as human beings, and it is one of the most important media that God has chosen to use in His dealings with man.

Martin Luther’s understanding of the importance of language in the relationship between God and man helped him to come to the principles of the Reformation. He writes:

’Twas a special gift of God that speech was given to mankind, for through the Word, and not by force, wisdom governs.

Through the Word people are taught and comforted, and thereby all sorrow is made light, especially in cases of the conscience…Truly speech has wonderful strength and power, that through a mere word, proceeding out of the  mouth of a poor human creature, the devil, that so proud and powerful spirit, should be driven away, shamed and confounded. (Thomas S. Kepler, ed., The Table Talk of Martin Luther, [Grand Rapids: Baker Book House, 1952], p. 29.)

Language is a gift that God gave to no other earthly creature but man. Noah Webster (1758–1843), who compiled the first dictionary of the American language, points out in the introduction to his dictionary that “language belongs exclusively to intellectual and intelligent beings, and among terrestrial beings, to man only: for no animal on earth, except man, can pronounce words.”

Webster made no apology for defining language in the way that he did, because he was convinced that man is absolutely different from the animals and that language makes for a big part of that difference—especially the unique way that human beings can relate to one another and live together in communities.

Animals may express and communicate their feelings, but they never exchange thoughts or general ideas, as people do because they have no thoughts or general ideas in the proper sense. One animal may signal “danger” to another, having seen a particular predator, but a rabbit never signals to another rabbit, the complete thought that “all foxes are dangerous because they like to eat rabbits.” Animals are not capable of human communication. It is human communication because it uses names, words, language. When we talk with other people, it is like getting inside one another’s head. And communication of that sort allows human beings to live together in communities, to be one, as no species of animal can.

Language also permits human beings to relate to God in a way that no other part of creation can. Human language, in fact, originated as the creation of God. This is how Noah Webster explains the origin of language:

Language was bestowed on Adam in the same manner as all his other faculties and knowledge, by supernatural power; or in other words, was of divine origin; for supposing Adam to have had all the intellectual powers of any adult individual of the species, who has since lived, we cannot admit as probable, or even possible, that he should have invented and constructed even a barren language, as soon as he was created, without supernatural aid. It may even be doubted, whether without such aid, men would ever have learnt the use of the organs of speech, so far as to form a language. At any rate, the invention of words, and the construction of a language must have been by a slow process, and must have required a much longer time, than that which passed between the creation of Adam and Eve. It is therefore probable that language as well as the faculty of speech, was the immediate gift of God.

Because God has given us our powers of thought and language and because He has chosen to reveal His will and His way to us in a written form, the Bible, we need to pay particular attention to the teaching of grammar, spelling, composition, and literature as we seek to educate students in our Christian schools for God’s service. The study of language reflects the ability God gave man to organize his thoughts into a structured, logical, rational media for thinking and for exchanging thoughts with other individuals. This structure and organization in turn reflects the logic, reasonableness, and orderliness of the One who created man in His image.

Now, it is true that many modern scholars, especially the social scientists and those affected by them, would not agree with Martin Luther and Noah Webster concerning the origin of language as the creation of God and therefore to its intricate connection with logic and reasoning ability. Since the time of Darwin, linguistic analysts have sought in vain for an origin of language other than that which is inferred by the Scriptures. Otto Jespersen, in Language: Its Nature, Development, and Origin (W.W. Norton and Co., 1964) tells of a number of past theories concerning how man developed language. He names the bow-bow theory, the pooh-pooh theory, the ding-dong theory, and the yo-he-ho theory. Jespersen admits that all of these theories have problems, and he proceeds to search for a better explanation. His reasoning is this:

If the change witnessed in the evolution of modern speech out of older forms of speech is thus on a larger scale projected back into the childhood of mankind, and if by this process we arrive finally at uttered sounds of such a description that they can no longer be called a real language, but something antecedent to language—why, then the problem will have been solved; for transformation is something we can understand, while a creation out of nothing can never be comprehended by human understanding (p. 418).

If language is merely the product of evolution, a response to a stimulus, an emotional outcry, an imitation of the animals, why should it be governed by rules, and why should we be able to say that some of the ideas it expresses are more elevated than others?

At Abeka, we still believe that the Bible provides the only reasonable explanation for the origin of the universe, of man, and of language. We believe that the purpose of human language is the communication of God’s truth. And we believe that there are standards for man to adhere to in language as in all of life. This is why our grammar books emphasize structure, rules, analyses, and the kind of practice that aims at mastery. This is why we place an importance on correct spelling and the continual enlargement of each student’s vocabulary. This is why we emphasize the continual improvement of writing abilities. God has given us the great commission of communicating His truth to mankind, and we must use the finest tools available to carry out this goal. 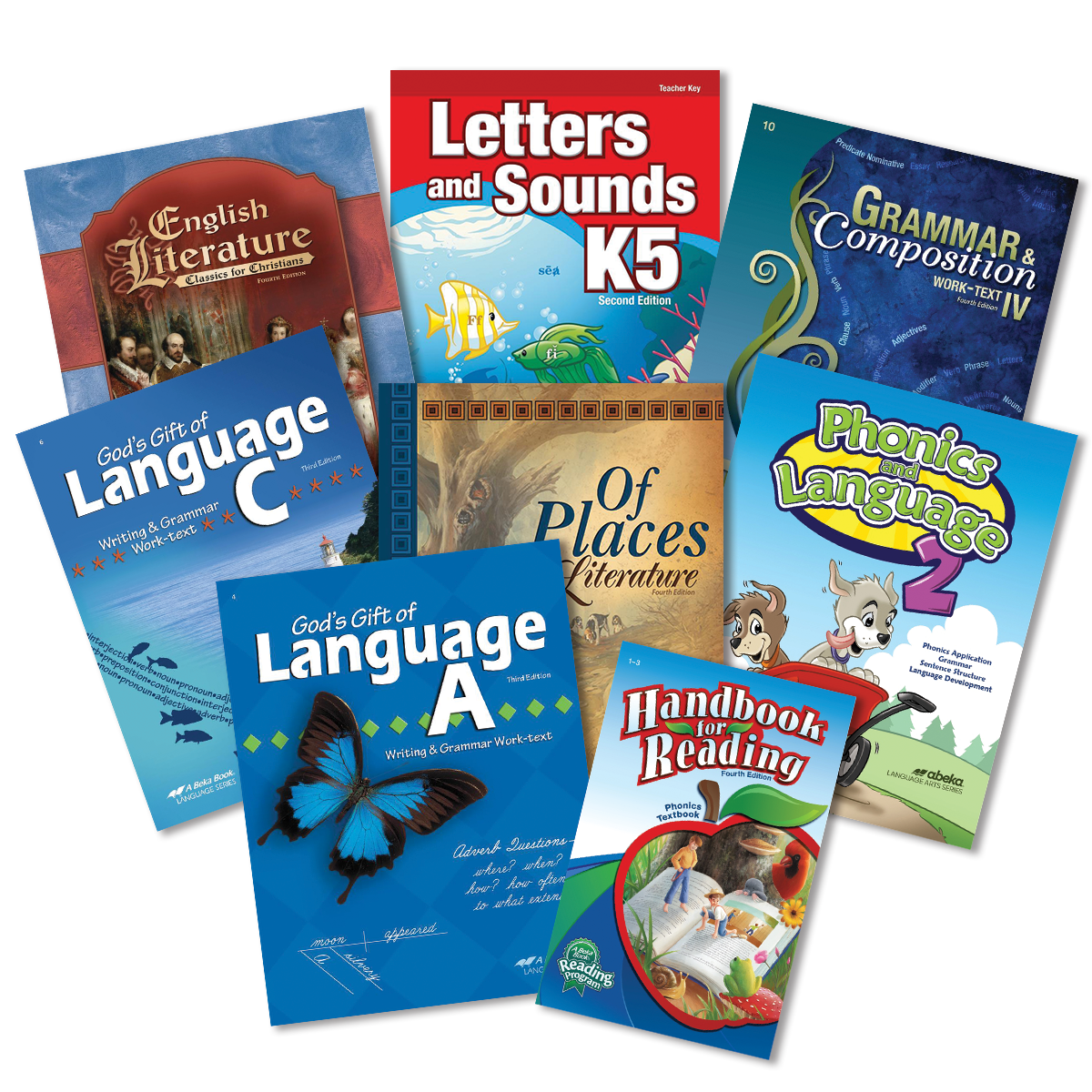 Abeka is known for our thorough, comprehensive Language Arts program.

Comments for Language Arts in a Christian Perspective