Is the teaching of beginning reading so mysterious and complicated that we still do not know for sure how to proceed? Such is the conclusion of Robert C. Aukerman after he reviewed 165 different approaches to beginning reading. He says that he suspects that some of the 165 different approaches may be more effective than others, but at this time we cannot know which ones, because it appears “next to impossible” to apply “adequate research techniques” to the evaluation of reading methods. He says that until we can understand and apply the psychology of learning to the methods of research, we must be content with our “primitive means” and go ahead and do “the best we can.” He gives one note of optimism: “We certainly can do better than we are doing at present.”1

That we “can do better than we are doing at present” seems to be an understatement, considering the growing numbers of Americans who cannot read or write properly. “Today, a staggering 23 million Americans—1 in 5 adults—lack the reading and writing abilities needed to handle the minimal demands of daily living. An additional 30 million are only marginally capable of being productive workers…. Demographers say the number of illiterates is steadily mounting, swelled by 1 million school dropouts a year.”2 The National Assessment of Education Progress survey published in 1976 says that in 1975, 35 percent of the nation’s fourth graders, 37 of the eighth graders, and 23 percent of the twelfth graders could not read.3 The Adult Performance Level study of 1975 shows that only “46.1 percent of the population between 18 and 65 were fully proficient and fluent readers. As you can see, the illiterates plus the slow readers are now a majority of the U.S. population.”4

Considering these statistics, there can be little doubt that our schools need to do a better job of teaching reading. But Professor Aukerman’s conclusions about what one must do in order to try to do better must be extremely disheartening to those who do not know the “secret” of teaching reading. He says that a “surprising number of ‘others’ have entered the field of reading from such areas as business, linguistics, speech, hearing, sociology, technology, languages, homemaking, television, psychology, physical therapy, audio-visual materials, programming, statistics, medicine, and optometry,” and that we would do well to heed what all of them have to say. He thinks that it is necessary that we have knowledge of all of the new approaches, and that “each new approach deserves a chance to prove itself under reasonable research conditions and in normal classroom environments.” We must make “every effort to explore the good in each approach and give each a chance to prove itself in our own hands.” If we do otherwise, we “may be rejecting the very messiah for whom we have so long been watching and waiting.”5 Earlier, in his introduction, Professor Aukerman set the stage for his reviews by saying that any findings presented in his book “as evidence that one approach to beginning reading is superior to another, or that any approach is effectual as a means of helping children learn to read are, at best, educated guesses.”6 These are discouraging words, if true. Aukerman’s conclusions indicate that even if one were able to personally experiment with all known approaches to reading and listen to the ideas of experts from every field imaginable, one still would be able only to guess at how to go about teaching reading.

But is this pessimism justified? Let us first point out that although Aukerman refers to 165 approaches, most of those approaches generally fit into one of two basic approaches to beginning reading: the whole word approach or the phonics approach. Within these two systems there are, of course, variations which may be difficult to evaluate, but the central elements of these two approaches not only can be evaluated but already have been. It is unconscionable and silly to pretend that we still do not know which of these two basic approaches is superior. The earlier whole-word (look-and-say or sight-reading) method has been thoroughly discredited and shown to be the major cause of the reading problems in America today (see the overwhelming evidence in the books by Blumenfeld, Chall, Flesch, and Terman and Walcutt listed at the end of this article). But now we have a modified whole-word approach that came into being after Rudolph Flesch and others made such a strong case for phonics. The whole-word establishment decided to camouflage their old approach to make it appear that they are now teaching phonics. In reality they are not. According to Aukerman, they are including some strands of phonics, but the phonics elements are only casually related to the whole-word approach which they still use.7 Flesch says, “In contrast to the phonics-first texts, which teach all of phonics; look-and-say materials teach only a small part…. By now I estimate that on the average they offer 20 to 25 percent of the phonic inventory….”8

This new whole-word approach has, among other things, been called “gradual phonics” because it spreads its few phonics elements out over several years. True phonics, in contrast, has been called “intensive phonics” because it teaches all of the main sound-symbol relationships intensively from the very beginning of reading instruction. Because of the “slick” promotion of this new method, many people may not realize that the method is still the whole-word (look-and-say or sight-reading) method. They may believe that since it has some phonics in it, it may now be all right. The intent of this article is to show why the whole-word (gradual-phonics) method should be scrapped, and intensive phonics put in its place.

It should be evident now that if one wishes to teach his students that individual words are not important, that freedom from standards is desirable, and that low literacy is acceptable because it promotes the goals of socialism, he should use the whole-word (gradual-phonics) approach. But if one wishes to promote high literacy, excellence in education, and individual responsibility, he should use the intensive-phonics approach.

At this time, some educators are recognizing the failure of the whole-word method and are trying to switch to intensive-phonics programs, but it is estimated by Rudolph Flesch and others that approximately 85 percent of America’s schools are still using the whole-word (gradual-phonics) method, many of them mistakenly thinking that they are teaching phonics. Further progress may be made in the public schools, but those attempting to change reading methods will have to overcome the fierce resistance of the liberal educational establishment in order to do so.

The situation in Christian schools is much better. Excellent intensive-phonics programs are available, and most Christian schools across the country are using them. Unfortunately, a few Christian educators have accepted uncritically the abortive system put forward by progressive educators. The Christian must be wary of every theory that comes from humanistic thought and must not accept anything that is contrary to Scripture and the purposes of Christian education. He must remember that if the rudiments (first principles) are wrong the methods that take their rise therefrom must of necessity be suspect. Colossians 2:8 says to “beware lest any man spoil you through philosophy and vain deceit, after the tradition of men, after the rudiments of the world.”

Samuel Blumenfeld in The Victims of “Dick and Jane” makes a discerning comment concerning the reading programs in private schools.

Most private schools, particularly the religious ones, where Biblical literacy is central, teach reading via phonics. But since many private schools recruit their teachers from the same pool of poorly trained professionals and use many of the same textbooks and materials found in the public schools, their academic standards may reflect more of the general culture than one might expect…. The quality of a private school’s reading program therefore really depends on the knowledge its trustees and principal may have of the literacy problem and its causes. It is this knowledge that can make the difference between a mediocre school and a superior school.28

Considering Blumenfeld’s statement and the information presented in this article, a suggestion seems to be in order. Examine your present system of teaching reading. If it is a gradual phonics (whole-word, look-say, sight-reading, eclectic) approach, get rid of it and replace it with a program that teaches phonics intensively from the beginning of reading instruction. Remember, all the religious teaching in the world cannot make up for the damage done by the use of wrong methods. 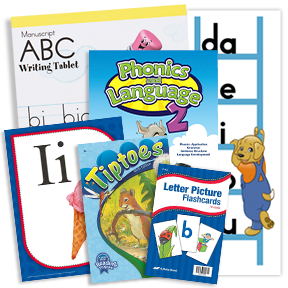 . The New Illiterates—And How You Can Keep Your Child from Becoming One. New Rochelle, N.Y.: Arlington House, 1973.

Flesch, Rudolph. Why Johnny Can’t Read—And What You Can Do about It. New York: Harper and Brothers, 1955.

. Why Johnny Still Can’t Read: A New Look at the Scandals of Our Schools. Foreword by Mary L. Burkhardt. New York: Harper and Row, 1981.

Comments for Why Not Teach Intensive Phonics?